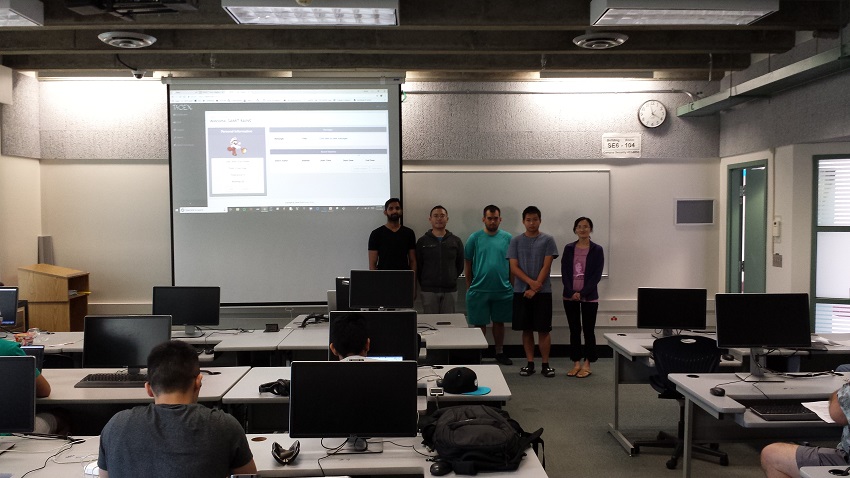 A few days after the presentations of the 3 projects that had been selected and developed by the 3 teams of students for the spring 2018 ISSP program I had received an email from the BCIT Industry Liaison and Student Wellness Coordinator, inviting me to submit projects for a rare summer program. Turns out that a few students opted to conduct their fall development project during the summer instead so that they could concentrate on their studies during the fall semester. Made sense to me.

The invitation to submit projects for consideration by the students carried a weighty requirement; project proposals had to be submitted within a few short hours. Naturally, I was interested, and I contacted the program head right away. During our conversation I told her that it wasn’t much time, but I thought that I could submit 3 or 4 projects by the end of the day. It was at this time that I was informed that there were only 3 teams of students and as such that I could only submit 1 proposal. My response was that seeing as I had 2 types of projects for the students to choose from, games and database development, that she should allow me 2 submissions. In the interest of giving the students a good range of choices for their projects the Liaison agreed.

Of the 2 projects submitted, a team of 5 students selected the database project continuation for the Taoex™ Club built using Laravel. If I had to choose which of the proposals to be worked on over the summer, it would have been the Taoex™ Club. I lucked out twice on this round of submissions it would seem.

With the project selected and the team in place they needed to be given some direction on what needed doing. As previously stated, this was a continuation on a previous ISSP build that while completed for that project, was not quite ready for public consumption. To complicate matters for the project, and just about every other website online, the introduction of the GDPR (general data protection regulation) out of the EU, needed to be incorporated into the project.

The students were given a list of 13 priority and 3 secondary tasks to do over the 10-week course. First and foremost was the installation of reCaptcha to the registration form followed closely by making the site compliant with the GDPR. Some of the other tasks that needed to be completed were various filters to prevent potential users from registering with special characters and vulgar words and a ranking system for players and clubs. By the close of the project I am happy to say that the team managed to accomplish 10 of the 13 primary tasks assigned to them along with creating a new home page and redesigning most of the internal pages.

To date, I have successfully completed 6 different ISSP sessions; 2 for the Fall, 3 in the Spring and 1 for the rare Summer program. The Fall program consists of a 10-week schedule where a team of students normally take on 1 project as they go about their normal curriculum. The Spring program consisting of about 5 weeks where a team of students only work on a project and has no course load. The rare Summer program which also consists of about 10-weeks where the students only work on their selected projects with very little to no other course load. Of the 3 that I have participated in the summer program, by far, offers the best value. Not to take anything away from the other 2 programs in terms of value but come on, 10 weeks of concentrated development time. Hard to beat that.

The Taoex Club, in support of the board game Taoex™ BCIT Industry Sponsored Student Project team for the Summer of 2018 consisted of Samit Bains (team lead), Nam Dang, Aska Fang, Li Wang and last but not least, Joeslito Ayeras. The overseeing BCIT instructor was Amir Amintabar and of course I can’t leave out Shebia Leung, the BCIT Industry Liaison and Student Wellness Coordinator. If your business is in the need of some computer programming I would not hesitate to recommend the BCIT ISSP program but be warned, there is a 50% chance of the students picking your project. If yours is not selected, just wait a few months and submit it again. Eventually your project will find the right team of students to match your project.