I know it has been a while since my last post, my only excuse is the tired, old stand by of “I’ve really been busy.”

Since taking on the side job of Film Liaison over at Riverview I find that between liaising, my regular job and trying to finish of the 100-handmade TAOEX games, there really isn’t much time left over to do anything else let alone, blogging.

Over the past year and a half, I have also been submitting projects to the BCIT Industry Sponsored Student Projects program. During this time, I had been fortunate to have had 7 of my projects selected by students and I must admit that so far, the results have been encouraging. However, despite the promising results to date, I was leaning towards suspending my submissions for a while due to the above-mentioned time constraints.

While I was contemplating on whether to submit any projects for the winter/spring and or, spring/summer programs I received an email from the Industry Liaison Shebia Leung, who was inviting me to submit a previous project for a new, trial, 20-week program. Normally, students work on projects that are 13 weeks or 5 weeks, depending upon the program start dates. I have done both programs in the past.

Anyway, I was told that the school wanted to try a program where the students would have a little extra time to work on projects with the focus on attempting to deliver a more polished product or result. Sounded like a pretty good program to me so I agreed to submit their requested Trieris game project. For those that do not know the meaning of the word Trieris; it is the plural of Trireme and a Trireme is an ancient Greek war ship. You know the old naval battle cry “RAMMING SPEED!” Those kinds of ships.

As previously stated, I had submissions selected for the intense 5-week program and was lucky enough to have had my Trieris submission selected for development by 5 students. During the 13 week programs students must work the projects into their regular curriculum but during the 5 program, all that they would be doing is the projects that they selected. Good deal huh, 5 computer students working full time for 5-weeks on my project and all for $500. I won’t go in to details as I have already posted about this project but suffice it to say that they did a pretty good job. You can read more about that project here.

As fate would have it my Trieris submission was selected by a group of 4 students who were willing to take on the task of continuing the work of the previous 5 students. The new students were given a lot of latitude with respect to how they would like to move forward with the project. They could have continued to further develop the program using Java as done by the previous group or they could salvage what they could of their code and port it into another programming language. One of the students, I can’t remember which one by name, was strongly advocating for further development using Unity. Having had one of the previous projects developed using Unity I agreed to this change despite limiting the play to desktop computers.

April 10, 2019 the students completed the first part of the program and did a presentation of the work they performed to date. During the presentation we learned that they successfully ported the previous group’s code into the Unity program, including the last group’s AI programming. We got to see their new layout and design for the user interface. We got to see the beginnings of the animations. All in all, a much better user experience so far.

I say so far because for the next 5 weeks most of the work to be done will be going towards improving animations and the user interface to give the users a greater gaming experience while playing Trieris online.

Round 2 for this new BCIT ISSP test program has come to an end and team “RAMMING SPEED” made their presentation on May 21, 2019.

Nate, Justin, Adam and Thompson did a great job in their continued effort to complete the computer game Trieris. The team went above and beyond the call of duty in their efforts to improve the user interface and experience.

The team also received an added bonus when student Matthew McKenzie offered to write and produce a thematic music loop for the game. Matthew was looking for a worthwhile subject for his own school project and the work he did made for excellent background music for the game.

While Trieris isn’t quite ready for full release, it isn’t that far off. Presently, team Ramming Speed has delivered a fun single player versus 5 computer opponents computer game. The plans are to first convert this version of the build over to a web based game for people to play online. Soon after that the plan is to further convert the game to a multi-player, multi-room web based game. Stay tuned for further updates and posts on our progress. 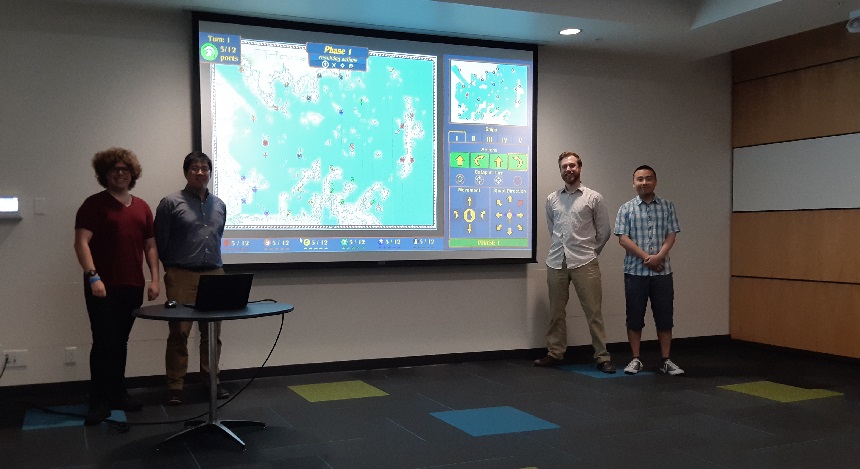